In her search for her younger brother, Beth falls into an enemy camp.

The war between the states often pitted brother against brother, and father against son. The rest often suffered as they tried to remain true to themselves.  How often the question was asked, but unanswered:  Whose side was God on in this terrible war?  The battles raged on, taking the young and the old, and in between, they also fell to a cause, whichever side they fought for. The innocent were swept along, sometimes at odds to their beliefs, sometimes adrift to any plan the North and South envisioned.

Beth Anders, 16, disguised as a boy, leaves her home in Maryland to find her young brother, who has run away to enlist for the North in the Civil War.   In Pennsylvania, she is captured by Confederates and sent to the Colonel’s 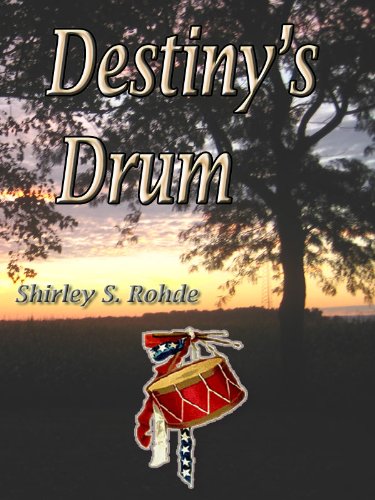 home in Virginia to help his family.  Beth finds the children are grown, spoiled and demanding. They make her life unbearable.  Only the oldest son, Captain Bowand, who has brought her to Virginia, seems kind and considerate, but he returns to his unit to fight in the battle of Gettysburg.  Beth’s life is a series of challenges. She struggles to survive her captor’s hatred. and to devise a plan of escape.  She didn’t expect to begin to care about the Bowand family.

DESTINY’S DRUM has been available on Amazon’s kindle, but is now also listed in paperback for you reading pleasure. Enjoy!

Previously on kindle , DESINY’S DRUM is now available on paperback

As well as kindle for your reading pleasure. For those readers who like to hold a book and like  to turn the pages this is  the answer for your need. Enjoy!!